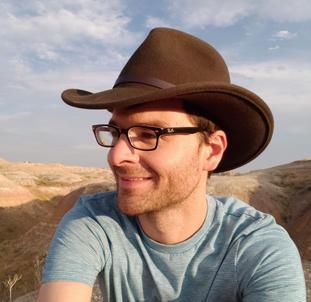 Peter Bingham-Pankratz was born and raised in Wisconsin. He started his creative career by writing and illustrating homemade comic books and moved on from there. Peter graduated Beloit College with a degree in creative writing and soon after began writing his first novel, The Fifth Civilization.

In 2018, Peter released Ultima Meridian, the sequel to The Fifth Civilization. In 2020, he released the final book of the trilogy, Beneath the Vanished World. He is now working on his fourth novel. Among Peter's other works are a novella, The Four Horsemen in New York, and an essay published in Eclectica Magazine.

In his spare time, he enjoys hiking, watching classic films, and seeing what new things he can make with peanut butter. He has recently taken up birdwatching and watercoloring.